Of Roots and Rot

Caloise Yarrow spends her days apprenticing with her favorite aunt as a Talumist, weaving story magic commissioned by local villagers for their ever-dwindling crops and livestock while searching for a way to break her family’s curse. With her mother ailing under the hex, she’s determined to finally end the blight that has plagued her family for generations before it claims her, too. So when the gates to Hedgeglove Manor—a reclusive, crumbling house once renowned for its wealth of history and old spells—open for the first time in fifteen years, Caloise is certain she can find the answers there to finally break the destructive spell. But Hedgeglove isn’t taking on apprentice Talumists as Caloise hoped. The gates have opened for one reason only: an open call for suitors for the young Lord, Crimm Fallothorn.

Crimm is exactly what Caloise expected—handsome, all too aware of his own charm, and completely clueless to the realities of life outside of Hedgeglove Manor’s secluded walls. But he’s taking his courtship seriously, with a competition for his hand, and convinces Caloise to enter and play at being his favored suitor while using her coveted story magic to help him identify a good partner—someone he can really trust. In exchange, he offers her access to any book or scroll within the manor.

Certain one of those tomes will have the answers she needs to break her curse, Caloise agrees. But as the courtship competitions escalate, danger surrounds Caloise on all sides—in jealous suitors envious of Crimms feigned favoritism, a growing closeness with Crimm that might not be entirely fake, the Yarrow family curse setting in like knives in her stomach, and something rotting deep within Hedgeglove Manor that makes her own curse look like child’s play. To cure the rot and generational curses, Crimm and Caloise will have to learn to trust each other—and themselves. For words have power, and if not careful, the stories we tell ourselves become all too real.

Of Roots and Rot is a young-adult romantic fantasy novel featuring: 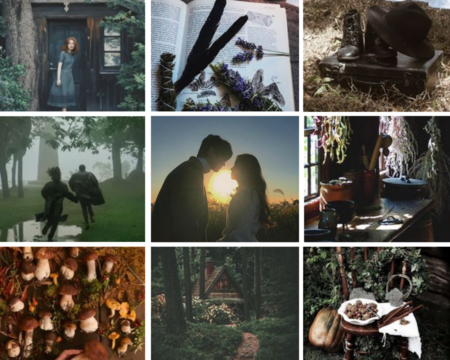 Click to contact me through the form, connect with me on social, or email me at christinelarnold@gmail.com to learn more about this project.